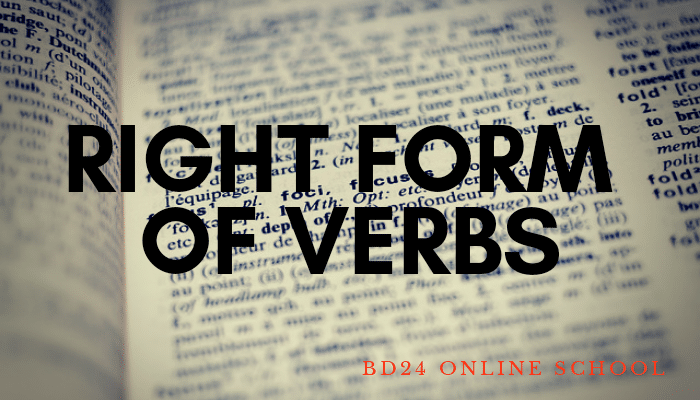 Rule-2: Preposition: (in, at, on, of, for, from by, with, without, before, after, into, across, about) + noun / verb + ing.
Example: i) Television is an important source of entertainment or entertaining.
ii) Children are fond of using mobile phone.

Rule-3: To + verb 1 but (Addicted to adverse to, Be used to, with a view to, look forward to, get used to, be accustomed to) + verb + ing
Example: i) Simu went to London to get a good job.
ii) Shamim tried to join the Navy.
iii) We are looking forward to hearing from you.
iv) I went to the stage with a view to dancing.
v) People of Bangladesh are used to eating by their hands.


Rule-6: (now, at this / the moment, at present, day by day, increasingly, rapidly) = present continuous tense.
Example: i) Mobile phone users are increasing day by day.
ii) He is eating now.

Rule-7: (yesterday, one day ago, once, last, after a few days, last nihgt, once upon a time, in the past, previously) = past Indefinite Tense.
Example: i) I received your letter yesterday.
ii) One day I borrowed a book from you.

Rule-8: (just, just now, already, yet, ever, lately, recently, immediately) = present perfect tense
Example: i) He has transferred from Dhaka recently.
2) We have shifted to safe place immediately.

Rule-9: (mind, worth, without, get used to, got used to, be used to, cannot help couldn’t help, would you mind) + verb + ing
Example: i) Would you mind having cup of tea?
ii) He can’t help smoking.

Rule-10: (had better, had rather, would better, would rather, let, must, need, dare, make, would sooner, had sooner) + verb1

Rule-11: (It is time, It is high time, wish, fancy) = past indefinite)
Example: i) I fancy I turned a pale.
ii) It is high time we developed our country.

Rule-14: Present Indefinite / present perfect tense + since + past Indefinite tense
Example: i) It is many years since I came to Dhaka.
ii) My years have passed since I had met her.

Rule-15: past indefinite tense + since + past perfect tense.
Example: Many years passed since I had seen her last.

Rule 16:
The verbs are also related to the structures of different sentences and clauses. A clause has only one verb. In fact, a clause cannot contain more than one finite verb but can have participles (without auxiliaries), infinitives, and gerunds.
Example:
• I wanted (main verb)to go (infinitive) to the wedding.
• Swimming(gerund)is(verb) a good exercise to keep (infinitive) your body fit and healthy.
• Pray (verb) for the departed (past participle) soul.


Rule 17:
No sooner had, hardly had, scarcely had, etc. are the adverbials that require a past perfect tense and a past indefinite tense for the sentence.

Rule 18:
Coordinating conjunctions (and, but, or, yet, so) and although/though, as, because, till/until, when, whenever, as soon as, while, which, what, that, etc. connect two clauses which have the verbs of the same tense.
Example:
• We went to London when we were young.
• I got up, and he left the room.
• As soon as I came here, he greeted me.
• I could not go there because I was sick.

Rule 19:
The conjunction as if/as though takes simple past/past perfect tense in the following clause.
Subject + simple present + as if/ as though + subject + past simple
Subject + simple past + as if/ as though + subject + past perfect
Example:
• Robert talks as if he were the prince. (Were is the only ‘be verb’ in this kind of sentence)
• Latham played as though he had seen the ball very clearly.
• I slept as if I had been dead.
• He behaves as if he were her husband.


Rule 20:
Prepositions, articles, and possessives are always followed by nouns or gerund form of the verbs.
Example:
• He is keen on moving
• I am thinking about doing the job.
Alex insisted on going out then.

Rule 21:
To is the only preposition that takes the base form of the verb. However, there some phrases with to being at the end of them, which require the gerund form of the verbs.
With a view to, look forward to, being accustomed to, being used to, admit to, confessed to
Example:
• He went there with a view to confessing his crimes.
• I am looking forward to meeting the princess.

Rule 22:
To be, being, having, getting, etc. are generally followed by the past participle form of the verbs and other adjectives.
Example:
• Being tired, he took some time off from work.
• He became astonished being robbed in the daylight.
• John went to bazar having eaten a burger.
• He wanted to be educated.

Rule 23:
The causative verbs always take the next verb in its base form. See causative verbs and their usages.
HAVE – GET – MAKE – HELP – LET
*Note: Get takes the next verb as infinitives/past participle.
Example:
• I had him wash the dishes.
• He makes me do all the work.
• He got me to make his dinner.
• I got the glass broken.
• Let him help her finish the assignment.

Rule 24:
The base form of the verb is also used in the clauses that use the subjunctive mood. Some certain verbs + the conjunction that requires the next clause to use the subjunctive mood and the clause uses the base form of the verb in it.
The verbs are:
Advise – demand – prefer – require – ask – insist Propose – stipulate – command – recommend Suggest – decree – order – request – urge – move
Structure:
Subject + the verbs of the above box (any tense) + THAT + subject + base verb + . . . . .
Example:
• He insisted that I stay at home.
• The office requires that we complete our work timely.
• She commanded that he stop
• I recommend that you wake up early.
Note: There are some clauses also which require the verb of the next clause to be in base form.
The clauses are:
It is/was + past participle form of the verb of the above box + THAT
It is/was urgent + THAT
It is/was necessary + THAT
It is/was important + THAT
Example:
• It is important that you invite him.
• It was necessary that I make a fence.
• It was recommended that you meet the principal.

Rule 25:
Since a single clause cannot take two verbs, it usually converts the additional verbs to complement by making them infinitives or participles or gerunds.

Rule-28: In Interrogative sentence auxiliary verbs will be seated according to tenses.

Rule-30: Present Indefinite + since + Past Indefinite and Past Indefinite + since + Past Perfect.
For example: It is many years since his father died. (die)
Many years passed since his father had died. (die)ing them infinitives.
Verbs followed by the INFINITIVES
agree – desire – hope – plan – attempt – claim – decide – demand – expect – intend – prepare – tend – fail – learn – pretend – want – wish – refuse – need – forget – hesitate – offer – seem
Example:
• He agreed to do
• He desires to go to Disneyland.
• I want to work